The grumbling is growing. Marketers are getting frustrated that fans seem not to be noticing their Facebook page updates. For some, engagement seems to be lessening since Facebook introduced the Timeline format.

This is anecdotal however. There is little data to support this now. Some surveys show increases in fan engagement. Some, like the study of 3,500 pages, done by Edgerank Checker, conclude that Timeline has had no effect on fan engagement. Since only 2% of fans ever return to a Facebook page after they have “liked” it and Facebook itself states that only an average of 17% of  pages’ fans see its updates in their newstreams, the Timeline format change should have no effect whatsoever.

According to Ederank Checker, both the control group (No Conversion) and the Pages that converted to Timeline experienced nearly identical ratios. Roughly 60% of the Pages analyzed experienced a Decrease, while roughly 40% experienced an increase. Their conclusion? The introduction of the Timeline format had no significant impact fan engagement.

Then why are we hearing these stories?

Something changed. Wait, could it be Timeline? But for profiles?

It was for me. I found the change over to the Timeline profile visually distracting. I started ignoring the news ticker and coming to Facebook only to interact in the few private groups I take part in. There was so much going on and it was so distracting I stopped paying attention to the news stream and only noticed on occasion if a friend’s name popped up.

I wonder if others have had similar reactions? An eye tracking study by SimpleUsability showed that Timeline brand page users actually find some of the new elements confusing. Brand pages don’t differ much from Timeline profiles visually. Lots of different things to look at. I wonder if other fans are feeling overwhelmed and inundated by the noise and clutter?

SimpleUsability MD Guy Redwood said it “is clear that the average user doesn’t fully understand the new layout, or interact with it in the way intended. This will likely change over time, but as the mechanics of obtaining ‘Likes’ has become more difficult for brands, they now need to drive engagement more than ever. Page editors no longer have the ability to set targeted landing tabs or applications for non-fans. In the past you could direct people onto a particular tab to encourage likes or interaction with a promotion.”

However, Facebook ad clickthroughs are half the industry standard, which means that these same fans you are trying to stay in front of may not respond to the ads you are posting. To get their attention.

So what are marketers to do?

Well, a picture is worth a thousand words, right?

One way to break through the clutter is to use imagery and video. Content moves through the social web at lightening speed but imagery grabs our attention and we can’t help but notice a compelling picture. As human beings we are drawn to other human faces (advertiser have known this for eons.) Video reaches right out and grabs us by the throat and can hold us rapt. In a study by emarketer, 60% of respondents said they would watch video previous to reading text on the same webpage. Video and imagery build subconscious connections. 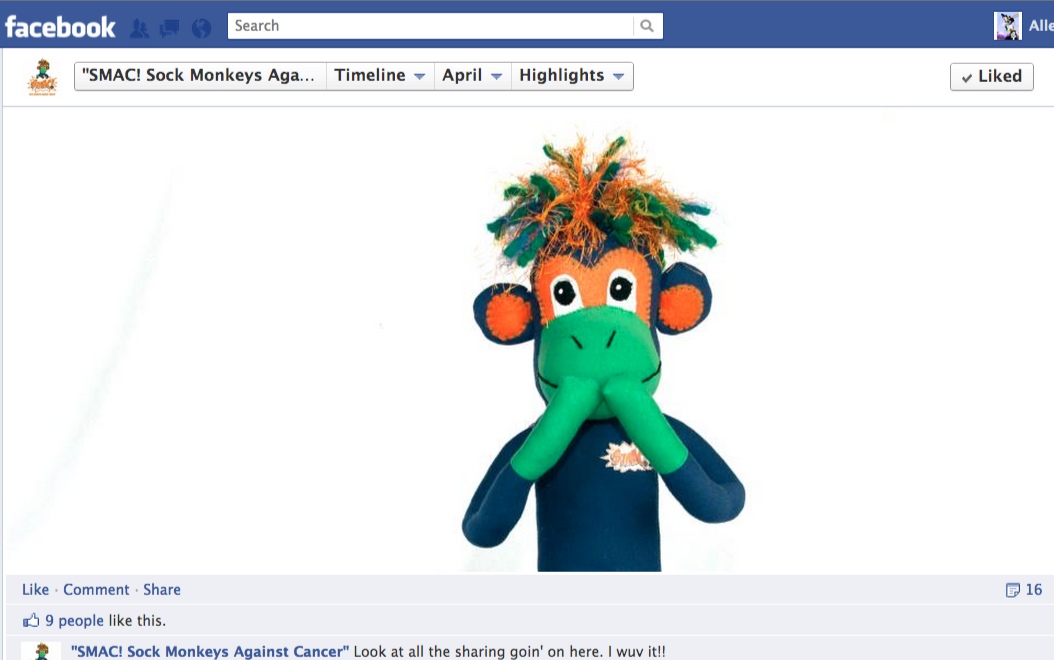 Jennifer Strauss Windrum, who founded and manages the WTF (Where’s The Funding For) Lung Cancer and SMAC! (Sock Monkeys Against Cancer) Facebook pages, finds creating more visual content has helped maintain her Facebook fan interaction, although she has seen a definite decrease in response since the implementation of the Timeline format.

Julie Pippert, founder and director of Artful Media Group, confides that her secret weapon is to approach the Facebook pages she manages like Pinterest boards. She shares short punchy updates with vibrant images more frequently than longer text updates. Pippert manages to keep fan interaction going but says that it is a constant struggle.

As Miranda Miller, of Search Engine Watch, says, “You’re going to read a lot of conflicting data, ‘fact,’ and opinion. There is no magic formula. The only way to discover what works for your business is to try, test, tweak, rinse and repeat.”

Do you need help understanding how Facebook fits into your marketing? Give us a call at 419.740.1262 or shoot us an email at [email protected]. We can help.

About the Author: Allen Mireles