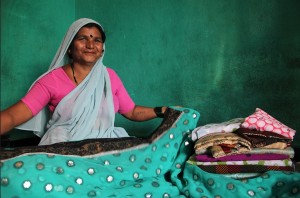 The Hope Project is a campaign to inspire urban masses towards empowering rural women through small contributions. What makes this project special is that the women, in this case, are ex-Devadasis and the possibility of self-reliance through entrepreneurship is a ray of fierce hope for them. milaap.org

What would you say if you were told that a small loan—not a donation, mind you, but a real loan, where you’d get your money back—could completely change someone’s life? And that in 2014 you could invest in businesses started by former Indian sex workers, helping these women stand on their feet for just $25? 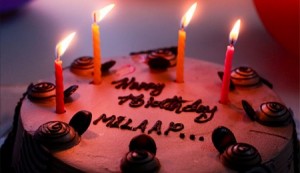 Milaap, the Hindi word for “unity,” is a mission-driven for-profit organization that inspires and empowers urban and informed dwellers around the globe to effect social change through micro-loans. Founded in June 2010, Milaap is the vision of three Millennial entrepreneurs, Anoj Viswanathan, Sourabh Sharma, and Mayukh Choudary, who wanted to change the popular concept of “giving” to make it a personal, transparent and sustainable process.

Milaap targets poverty improves access to sanitation, helps students get their education and improves the lives of those who really need it. To date, Milaap has been able to raise more than $1.6M and help more than 47 thousand people in India.

Milaap encourages people from all around the world to lend individually and collaboratively, via social fundraisers hosted on its platform, to micro-businesses started by India’s working poor, for causes as diverse as water, energy, sanitation, and education. So literally, when you lend a little, you end up changing a lot.  And when you take it one step further, by adopting a cause and starting your own fundraiser, you become a Milaap Champion!

I’m Championing Milaap’s 2014 flagship campaign, The Hope Project, which shines a spotlight on former Devadasis (pronounced “day-vuh-daah-sees” and meaning “servants of God”). These are rural Indian women who, because of a centuries-old tradition (outlawed but still prevalent) were “dedicated” to serve their temple deity for the rest of their lives. Unfortunately, the system was abused, and many were forced into the sex trade. In fact, it’s estimated that even today, approximately 250,000 girls in parts of southwestern India are still dedicated to this ancient practice. 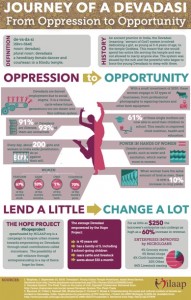 The Journey of a Devadasi: From Oppression to Opportunity. Credit: Milaap.org

Devadasi refers to a hereditary female dancer and courtesan in a Hindu temple. An ancient practice in India, the Devadasi (meaning ‘servant of God’) system involved dedicating a girl, as young as 5-6 years of age to the temple of the Goddess. She would spend her entire life serving the temple and would not be allowed to marry. The system was abused by the rich and powerful who began to force the young Devadasis to sleep with them.

Devadasis are denied employment due to social stigma. It is a vicious cycle where future generations are also drawn into their ruthless system. 91 percent of devadasis are illiterate, and 93 percent are unmarried.  One of the biggest challenges Devadasis face is that the projected image spoils their chances at employment and the stigma associated with it. The government does help them, but there is still a long way to go, to eradicate this system.

Establishing the Devadasis in small businesses of their own helps considerably since that reduces their dependence on anyone else for employment opportunities. When they are in relatively stable jobs and earning an income, they can provide for their families. Their children can get an education and will not be forced to get into the same system.

“Yet the Devadasis’ situation is complex, and their views multifaceted. Their love of the goddess; their pride at their Devadasi status; and set against that, the appalling stories of their mothers and grandmothers dedicating them to a life of sex work, often before they can walk,” says film-maker, Beeban Kidron, who made the documentary, ‘Sex, Death and the Gods’ about the Devadasis. “The women’s stories are often heart-wrenching and their stoicism remarkable. Theirs is a life ‘dedicated’, not chosen – and they must comply. ‘What should I do?” ask their mothers, struggling to support a large family with “no money in my hand’.”

The average Devadasi empowered by the #HopeProject is 45 years old, has a family of five including three school going children, rears cattle and livestock and saves about $30 a month. 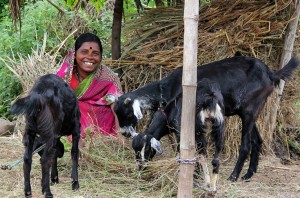 #HopeProject aims to help these hardworking women rebuild their lives by starting their own businesses. And when you, and I, and hopefully many others, invest in their lives, we’re doing just that—giving hope. Help me help them? Join us or contribute today.

Follow the #HopeProject hashtag for updates or to learn how you can be involved as well.

About the Author: Allen Mireles